ILLINOIS TEXTING BAN GETS SOME TEETH

These days, everyone seems to have a 5th appendage. Two hands, two feet, and a smartphone. And there’s nowhere we aren’t checking them, scrolling, putting them in an out of our pockets. Work, home, bed, bathroom, bar. Out to dinner, at home for dinner. With your friends, in front of your family, or just by yourself. It doesn’t matter. People these days are addicted to their smartphones. 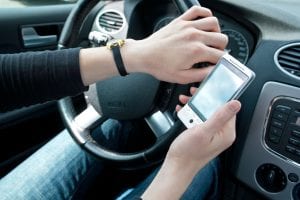 In 2010, Illinois banned texting and driving. Until this year, however, that ban was relatively weak in enforcement and punishment. The first offense was a petty offense. Meaning it didn’t go against your driving record and basically was a small fine. A second violation resulted in a moving violation. However, if your texting or use of a cell phone while driving resulted in a crash causing great bodily harm or death, you were looking at a cl. A misdemeanor for great bodily harm and a cl. 4 felony if your texting caused a death. At Robert Callahan and Associates, we think it’s important to update you on the changes in the law. Especially changes that could affect the daily lives and habits of regular people. Considering most people drive cars and even more, have smartphones, this is a development everyone needs to know about. Contact a criminal defense attorney that is up to date on the most current laws. Read More about the new texting while driving law   Illinois law, texting while driving