NOT JUST TEXTING WHILE DRIVING:

In 2014, using a phone without a hands-free device became illegal. Basically, from 2010-2014, you could use your cellphone while driving, you just couldn’t text. Once 2014 hit, it became illegal to operate any “electronic communication device” while driving. Illinois law defines an “electronic communication device” as “an electronic device, including but not limited to a hand-held wireless telephone, hand-held personal digital assistant, or a portable or mobile computer, but does not include a global positioning system or navigation system or a device that is physically or electronically integrated into the motor vehicle.” 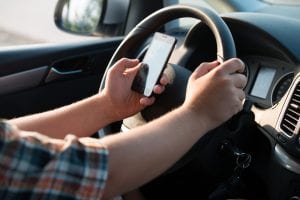 Meaning you can’t talk on your phone while driving. You can’t use or operate, in any manner, an iPhone, Android, smartphone, or any type of tablet, while driving. Simply holding your phone is going to be enough for the police to pull you over.   The law did carve out an exception for using your phone with a hands-free device. That remains the law. You can use your phone while driving if you have it connected to Bluetooth, for example. Additionally, using your vehicle’s built-in GPS navigation system or the audio player doesn’t count as an electronic communication device within the statute. No ticket in that situation.

Starting July 1, 2019, if you are caught using your phone while driving, you’re no longer going to get a simple petty offense your first time. You’re getting a moving violation. As the new statute clearly states “A violation of this Section is an offense against traffic regulations governing the movement of vehicles.” On top of that, you get a $75 fine. That jumps up to $100 for a second offense, $125 for a third, and $150 for all future violations. Exceptions: Texting and driving and/or using a smartphone while driving doesn’t apply in the following situations: The bottom line with this new change in the law: If you want to use your smartphone while driving, YOU HAVE TO HAVE A HANDS FREE DEVICE

MOVING VIOLATIONS-EFFECT ON YOUR LICENSE:

By making the first offense a moving violation, this change in the law could have a significant effect on your driving privileges. Under Illinois law, if you receive 3 moving violations in a year, your license will be suspended. The length of the suspension will depend on the nature of the other violations and the number of points against your license assigned to these violations.