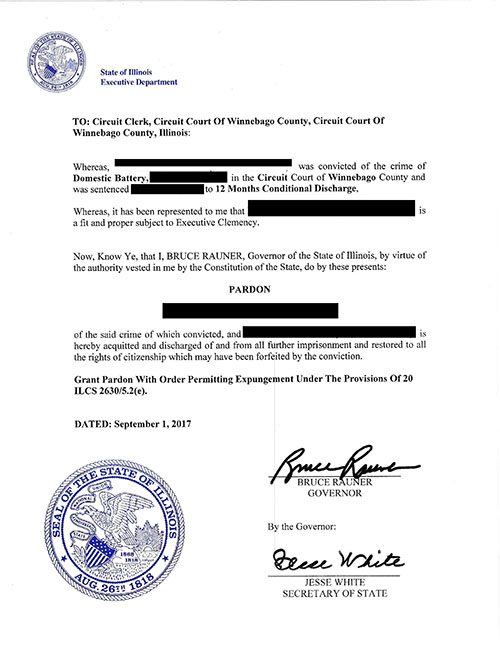 Chicago Criminal Defense Lawyer Robert J. Callahan has extensive experience with executive clemency (AKA Governor’s Pardons). We have a streamlined system that makes the process very smooth and separates us from the competition.

We begin with a detailed interview of the client/petitioner. After this is completed, we provide the client a written list of all required documents and information needed to draft the petition. Once we receive this, we draft a lengthy and highly personalized petition. Completing the petition usually takes between 4-6 weeks. When the client is fully satisfied with the final draft, we file the petition.

The next step is preparing for the hearing. Preparation includes, but is not limited to, providing written examples of frequently asked questions and conducting a mock hearing. If the petition is granted, the Governor will issue a Pardon Order. This Order also allows you to expunge your arrest record.

The Order shown here is from September of 2017 by Governor Rauner.

HY was convicted of domestic battery in 2008. In Illinois, domestic battery is not eligible for sealing or expungement. This was his first and only criminal conviction. However, due to this particular type of charge, HY felt certain industries were closed off to him. HY believed he had no choice but to clean his record in order to obtain better employment.

We were able clear and expunge HY’s record by filing a Petition for Executive Clemency on his behalf.  We prepared thoroughly and conducted a well organized hearing.  HY’s petition for clemency was granted on September 7, 2017.