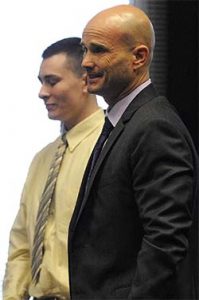 Cody Stilwell, the 21-year-old man accused of stabbing his ex-girlfriend’s stepfather in 2014, was acquitted on Friday almost 25 months to the day after he was first arrested. The jury took less than three hours to come back with the not guilty verdict.

Stilwell was shackled and led out of the courtroom, showing little emotion as if in disbelief that he was going to spend the Memorial Day weekend at home with his family.

A family member of David Kennett II, whom Stilwell stabbed — he said it was in self-defense — began sobbing and needed help out of the courtroom. Tears were also shed on Stillwell’s behalf.