Don’t throw those drugs in the trash. Not only are you putting children’s lives at risk, you’re gonna get arrested. The law is clear: when you throw out your trash, the 4th amendment goes with it.[1]   The 4th amendment protects you against “unreasonable searches and seizures.”[2] The home has a particular place of reverence in the eyes of the 4th amendment. “Every man’s home is his castle” is maxim handed down to American law from our English origins.[3] If anything, America has fortified its castle walls. The sanctity of the home is as an American as apple pie.   But once we reach the alley or curb, these castle walls tumble.Trash bags transform to bread crumbs. Little itty bits of evidence against you. What is this constitutional alchemy? The answer is found in perhaps the main ingredient of the 4th amendment: the expectation of privacy.[4] 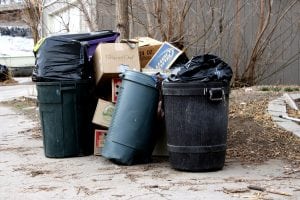 In California v. Greenwald, Mr. Greenwood caught the attention of law enforcement when they intercepted a suspected drug transportation to his address. Neighbors also reported heavy vehicular traffic at his residence. Naturally, the cops set up shop on his house and observed him putting out his trash cans. What he didn’t expect was the garbageman. Law enforcement arranged with the garbage collectors to give them Mr. Greenwood’s trash, unmixed, & prior to transporting it to their facility. What do you know? The black, opaque trash bags they delivered to police contained cocaine and/or “items indicative of drug use” when opened and searched. Based on this evidence, police obtained a search warrant leading to the discovery of  considerably more cocaine inside the residence.   Naturally, Mr. Greenwood felt the evidence against him was garbage. He challenged this trash all the way to the United States Supreme Court. Unfortunately for Mr. Greenwald, the result stunk, but the message was clear: there is no reasonable expectation of privacy in what you throw out.   This rule is based in two distinct characteristics of trash:     As Justice White pointed out,“[i]t is common knowledge that plastic garbage bags left along a public street are readily accessible to animals, children, scavengers, snoops, and other members of the public.”[5] But standing alone, “readily accessible” falls short.  A public bathroom is extremely accessible to all these miscreants, yet remains intimately private. That’s because the 4th amendment applies to “people not places,” with the exception being  places a person “seeks to preserve as private.”[6]   It’s the locations use, or rather our personal and societal intent for that location’s use, privacy pivots on.[7] Garbage is literally defined by this intent. Merriam Webster’s dictionary defines “garbage” as “discarded or useless material.”[8] We all understand the concept of waste removal whether we know it or not. Who didn’t have to “take out the trash” as a chore. It is no secret that garbagemen exist for the  “express purpose” of taking the trash to the dump. When you put your trash out, not only do you know what you’re doing, there’s a logical assumption you want to do it aka you don’t want it in your house. The very definition of garbage itself & its systemized collection assumes an  intent to convey the property to a third party/the public.[9] Adios 4th amendment.   What about that cigarette you flick on the ground or soft drink you tosh in that garbage can? Think about it, if you abandon property, why should your rights remain to protect that property? Evidence that is dropped or discarded is plainly abandoned and outside constitutional protection.[10]   But simply discovering contraband in your trash isn’t enough for a warrant: COPS NEED:       All of this is easily avoidable. Don’t commit crimes. But if you think you might be, your trash could be the key that opens the front door to law enforcement. If you abandon evidence of a crime, don’t think the cops will ignore it. They don’t have to. The law does not expect police to “avert their eyes” to evidence of criminal activity.[14] To ask them otherwise is simply rubbish.   At Robert Callahan & Associates, we know your rights so you never throw them away. We’ve been digging in the trash bins of the criminal courthouses of Cook County and throughout Illinois for decades. If you have been arrested and evidence is searched and seized by law enforcement, you need an experienced, aggressive law firm by your side so you don’t get taken out, along with the trash. [1] California v. Greenwood, 486 U.S. 35 (1988). [2] US Constitution, 4th Amendment. [3] Ker v. California, 374 U.S. 23 (1976). [4] Katz v. United States, 389 U.S. 347, 351 (1967). [5] Greenwood, at 39-43. [6] Id. at 351. [7] Lewis v. United State, 385 U.S. 206, 210 (1966). [8] https://www.merriam-webster.com/dictionary/garbage. (emphasis added). [9] Id.; Greenwood, at 41. [10] People v. Grant, 38 Ill.App.3d 62 (1st Dist. 1976). [11] People v. Burmeister, 313 Ill. App.3d 152 (2nd Dist. 2000); Greenwood, at 37-38. [12] People v. Redmond, 386 Ill. App.3d 409, 422 (4th Dist. 2008). [13] United States v. Certain Real Property Located at 987 Fisher Road, 719 F. Supp. 1396, 1404 (E.D. Mich. 1989) (reasonable expectation of privacy exists in garbage contained in closed garbage bags located against the back wall of the house, hidden from the view of ordinary citizens passing by the front of the house). [14] Greenwood, at 41. evidence, garbage evidence